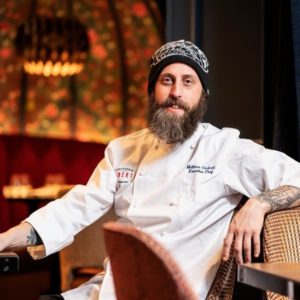 Q: What is your favorite family tradition? ?

A: Decorating for Christmas!

Q: What is the best advice you have been given?

A: Be patient and persistent.

A: The Renwick, DuPont Underground when it has events, and the Black Cat.

In March of 2020, restaurateur Hakan Ilhan called on Matt Cockrell to become the Executive Chef of Brasserie Liberté. Matt brings his French charcuterie talents and advanced knowledge of French cooking to the brasserie. With experience in high volume and neighborhood gem French fair, Matt’s talents will be right at home at Liberté.

A native of Vienna, Virginia, Chef Matt found his calling to cooking quite young. At the age of 13, he began working in restaurants in multiple capacities. Matt’s strong work ethic paved the way for him to work through college at East Carolina University, where he earned an English degree. Upon graduation, he found himself at a crossroad, but decided to pursue his passion. He attended Stratford University where he earned three culinary degrees. As a part of his training he worked with a renowned master butcher.

Upon graduation in 2007, Matt began his work at French restaurants in Washington, DC. He secured a position as a commis and worked his way up to be the youngest Sous Chef in the history of La Chaumiere, a DC landmark for classic French food. In 2014, Matt joined the team at Steven Starr’s Le Diplomate as Executive Sous Chef and quickly became an indispensable asset to the restaurant. Le Diplomate continued to rise in status and in 2016 it ranked #49 on the list of highest grossing independent restaurants in the country. In 2017, Matt was named Executive Chef of Mintwood Place, a role in which he continued to delight guests with his refined classics with a contemporary touch. On any given day Chef Matt can be found creating executing dishes such as Boeuf Bourguignon or his Saffron Mussel Chowder. He believes the most flavorful cuisine is made simply with the highest quality products. Matt considers it part of his job to inspire and educate guests about the bounty that surrounds us in the DMV area.